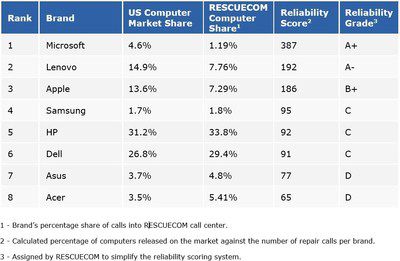 RESCUECOM is the Company you want, when you require the best Computer Repair and Security for your technology. "Our unlimited computer repair plans are the best remote computer repair, protection and monitoring money can buy. If we can't fix your first problem, I will give you a full refund" -David A. Milman, RESCUECOM CEO
❮❯

Microsoft soars to first place in the 2020 RESCUECOM Computer Reliability Report; Lenovo and Apple round out the top three.

The Most Reliable Brand

Fortunately for customers committed to buying from the most reliable computer brand around, the Microsoft Surface line includes computers for an array of needs, preferences, and budgets. Whether you are buying a desktop, a laptop, or a tablet, you cannot find a more reliable computer than a Surface.

If you value both affordability and reliability in a computer, Lenovo could be right for you. Lenovo computers have shown to be highly reliable and typically cost less than computers from tech giants Microsoft and Apple. The Lenovo Yoga line, acclaimed by Wired and PCWorld magazines, has several budget-friendly laptops.

With an unprecedented percentage of the population working, learning, and conducting hobbies from home, owning a reliable computer has never been as necessary as it is now. The spread of COVID-19 has changed our relationship with technology—perhaps forever. Computers have become our lifelines for connecting with both local and worldwide communities while stay-at-home orders and social distancing measures are in place.

“Until recently, when using the term “virus,” many of us thought “computer virus,” says David A. Milman, CEO of RESCUECOM. “Now because of the COVID-19 virus—not a computer virus—we have to pay careful attention to the state of our technology and make sure it’s reliable all day, every day.”

Samsung, HP, and Dell have a reputation for making cheaper computers. Although they beat companies like Microsoft and Apple when it comes to price, they score lower in computer reliability. Do not rule out these brands completely, especially if you are shopping with a strict budget, but be aware you will sacrifice computer reliability as a result.

1 – Brands percentage share of calls into RESCUECOM call center
2 – Calculated percentage of computers released on the market against the number of repair calls per brand.
3 – Assigned by RESCUECOM to simplify the reliability scoring system.