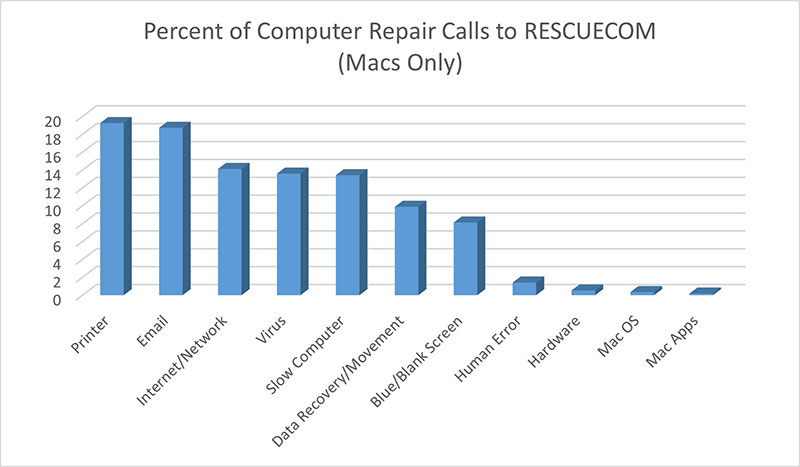 RESCUECOM, a computer support company, has released their latest report about the computer repair problems faced by Mac users and tips to solve them. However, the company needs to learn that the Mac’s operating system is now known as “macOS” (and has been for years), not “Apple OS X.”

That said, RESCUECOM says that, for Mac owners, issues with printers and emails dominate, while operating system problems are rare. Printer and email problems represent the greatest percentage of problems experienced by Mac users who seek computer repair, followed by Internet and network connectivity, viruses, and slow computers, the report adds.

RESCUECOM claims that Mac owners requiring computer repair are less likely to report operating system and app problems than any other computer problem. This phenomenon stands in stark contrast to the frequency of these problems among Windows users, signifying that consumers who pay Apple’s expensive prices receive the reward of high-performing machines,” according to the computer support company.

“Apple OS X is reliable because OS X is specifically designed to run on Apple designed and manufactured hardware, whereas Microsoft Windows has to run on thousands of different computer configurations of which the Microsoft manufactured Surface line of computers, only comprises roughly 4 percent of the Windows market,” says David A. Milman, RESCUECOM CEO. “For this reason, Apple systems and software do not require the high level of computer repair we are seeing with Windows machines.”