Are you getting the Internet speed you paid for? NY's attorney general wants to know 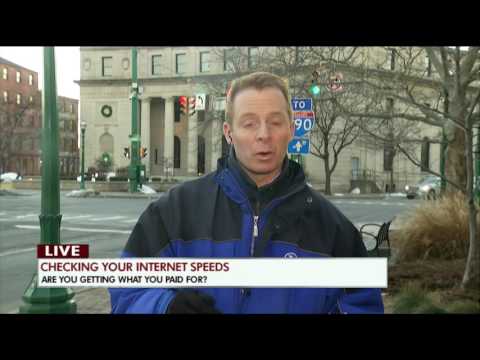 It's part of A.G. Eric Schneiderman's investigation into allegations the company is defrauding customers by having them pay for a service it can't deliver.

The typical U.S. home has seven devices that connect to the Internet - that's computers, tablets, TV's and more - but A.G. Schneiderman says some people are not getting what they pay for.

So how do you know if your internet is up to speed? There are ways to test it.

David Milman from RESCUECOM Computer Repair tested his home and office internet using the fast.com website developed by Netflix CEO Reed Hastings. His office internet is supposed to be 300 megabytes, however - with several computers running - it tested at just 221 to 225 megabytes per second.

Milman says multiple factors - including location, your modem and the age of the network wiring - can affect your speed and recommends people do a simple test like the one on fast.com.

In a statement, Charter says the allegations from the attorney general involve advertisements from before the Charter/ Time Warner merger, and Charter says it has already made substantial investments in upgrading the Time Warner Cable systems.

"We are disappointed the NY Attorney General chose to file this lawsuit regarding Time Warner Cable’s broadband speed advertisements that occurred prior to Charter’s merger. Charter made significant commitments to NY State as part of our merger with Time Warner Cable in areas of network investment, broadband deployment and offerings, customer service and jobs. In addition, Charter was among the highest rated broadband providers in the 2016 FCC Broadband Report. Charter has already made substantial investments in the interest of upgrading the Time Warner Cable systems and delivering the best possible experience to customers. We will continue to invest in our business and deliver the highest quality services to our customers while we defend against these allegations involving Time Warner Cable practices."

The attorney general's office also has a website where you can test your internet speed.