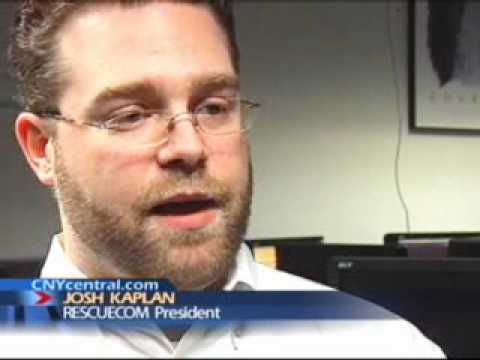 If you use Facebook, there's a chance your personal information could now be in the hands of advertisers and tracking companies. The Wall Street Journal is reporting that 10 popular Facebook applications have been transmitting users' personal identifying information to dozens of advertising and Internet tracking companies. Read more about it here.

And it's not just app use that's causing the breach. Josh Kaplan, president of Syracuse-based RESCUECOM, says you need to ensure security settings on your facebook page, to make sure that what your friends see about you does not leak out through their accounts. On the personal settings, 'everyone' does not mean your friends, it means the whole world. And, says Kaplan, you also need to check the security settings for apps, which is a totally separate area. His recommendation: log out of your account and look at it, as if you were an outsider. What you see of personal information is what's going out to the world. Kaplan also suggests 'housecleaning' once a month to remove apps that you don't use regularly.

So what does Facebook have to say about this? A Facebook spokesman told the Wall Street Journal the company plans to introduce new technology to contain the breach. "A Facebook user ID may be inadvertently shared by a user's Internet browser or by an application," the spokesman told the paper. Knowledge of an ID "does not permit access to anyone's private information on Facebook," he said.

According to the Journal, "Apps" are pieces of software that let Facebook's 500 million users play games or share common interests with one another. One example is FarmVille, a game with 59 million viewers. Other population apps include Texas HoldEm Poker and FrontierVille.

With so many people using these apps online, the apparent transmission of personal information is garnering plenty of reaction in cyberspace. One reader writes, "People need to understand that if you post something online it is not private...Since they are not charging you to use the service they must rely on advertising. They can make more money by collecting a database and selling it, or using it to show potential advertisers the demographic they reach."

Another writes, "At this point, anyone who continues to trust Facebook with any personal data is a fool. Many thanks to WSJ for exposing this latest instance of the contempt with which FB apparently regards its customers."

Another reader says you should expect this when you delve into the world of social media, saying, "It's kind of funny how people agree to sign-up to a free portal (Facebook) and then complain about their privacy...No one is obliging you to be on Facebook, so get out of it if you are not happy."

This isn't the first time Facebook has been confronted about online tracking concerns. Check out this article in the New York Times from 2007. Facebook users revolted when the company announced a controversial advertising program, then later agreed not to send messages about users' Internet activities without their approval.

This most recent breach leaves many Facebook users wondering how to protect themselves. For some answers, we turned to RESCUECOM, a national computer repair and technology services company based in Syracuse that also specializes in internet security.

"Everybody's concerned about privacy and rightfully so," RESCUECOM President Josh Kaplan told us by phone Monday. He says businesses and advertisers are looking for new ways to target a user and has several suggestions to keep your personal information private.

When it comes to applications, there's an application privacy setting on Facebook. Kaplan recommends you go in and limit or change what data the applications have access to.

He also suggests you search for your profile on Facebook and see what comes up. You may be surprised what kind of information you're giving out. Then go back and make adjustments to your privacy settings.