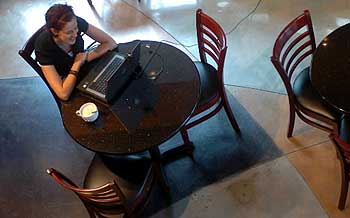 offered at La Casa Dolce in south Tampa.
More and more coffeehouses in the Tampa Bay area are adding the
service to lure patrons who need to be plugged in all the time.

TAMPA - J.J. Higgins drove around Tampa for an hour looking for one thing - a coffee shop with something more than coffee. Not muffins, not scones, not exotic chai tea. He wanted Wi-Fi Internet access, and preferably free.

"I'm a musician from Nashville [Tenn.] and my producer sent me some music that I have to download," said Higgins, 29, a singer in the gospel/rock band "Deep Waters Edge." Dashing into Mirta's Gallery and Coffee House downtown, Higgins hit paydirt- free wireless broadband, no password required.

"I'm always doing work on the road - I need the access.

" Mobile and hungry customers like Higgins, searching for their digital oasis, are just the kind of customer that franchise and independent coffee shops increasingly want to attract. And more coffee shops in Tampa Bay are coming to believe Wi-Fi access is as necessary an in-store perk as cream and sugar for bringing in more diverse, affluent, urban and socially well-connected customers.

The Indigo Coffee company in Tampa started offering Wi-Fi access at all its new sit-down locations, including the newest in Hyde Park Village.

The Mirta's Gallery and Coffee House where Higgins found his digital oasis, opened in December, and customers quickly started asking for wireless Internet. With the store just blocks from The University of Tampa, co-owners Duane and Alice Hall saw wireless as a way to bring in students looking for peace and quiet outside their dorms.

Lewis Robert Jr., owner of the NOLA Cafe in downtown Tampa said his customers enjoyed Wi-Fi for free for months, but not from his shop.

"The shipping company next door had wireless and my customers could pick it up for free," Robert said. "But they locked it down a few weeks ago and I'm going to have to buy our own system. People expect it."

The popularity of Wi-Fi hotspots plays on several trends-

Those trends add up to explosive growth in the number of public Wi-Fi hotspots.

In 2004, the San Francisco-based wireless research firm JiWire logged more than 50,000 hotspots in the United States. In 2005, those ranks doubled to more than 100,000. The company's list is extensive, but because Wi-Fi requires no license, listings are voluntary.

"My daughter's in Paris right now and she's really annoyed that Wi-Fi's not everywhere she goes," Rainie said. Between 90 million and 100 million Americans are online at any given day, Rainie said, and a survey his group conducted in January found 44 percent of Internet users regularly gain access someplace other than work or home.

That's a powerful argument for coffee shop owners to go wireless, Rainie said. American's on the go now expect everyone else to be online too - at a work, a coffee shop or elsewhere.

Costs vary widely to make that kind of access available to coffee-drinking customers.

Off-the-shelf Wi-Fi antennas cost about $50, and are sold at most electronics stores. In theory, coffee shop owners could plug one into their office PC, and let customers use their company Internet service.

"The danger with that is anyone within 100 feet can log into the network and snoop on customers, or the shop's computer," said David Milman, chief executive of the Syracuuse-based computer service company Rescuecom Corp. "From the standpoint of a coffee or burger shop, that's awful."

Even novice hackers can gain access to the shop's own accounting program, or worse, credit card processing account. A better, safer route is to set up a separate computer, with a dedicated Internet account and log-in system that keeps track of customers. Such systems can cost several hundred dollars, even $2,000 or more with equipment. But it also limits the shop's risk and liability if customers cause problems or surf criminal web sites.

"In the end, there is no free lunch," Rescuecom's Milman said. "If you offer customer's something with free access, you and them have to be prepared for everyone to have free access to their own computer too."

Indigo Coffee built a system for a few hundred dollars for each cafe, Timberlake said. As an extra service, Timberlake decided to include network plugs at each cafe table so customers can log into the Internet without using wireless signals. The investment easily pays for itself, he said.

"People are looking for this service," he said. "And we get a lot of good business through it."