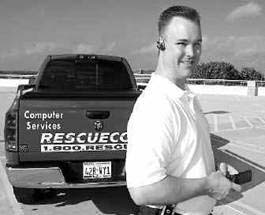 Craig Shue uses a hand-held device to stay in constant contact with clients and technicians.

It's a bad day when the computer locks up, the desktop won't open or some weird error message pops up saying it can't complete the task.

If the problem isn't obvious, you may have only three choices: Experiment on your own, make a call to the customer-service technician or take it to a service center.

As with any repair service, the technician costs money: anywhere from $70 to $100 per hour, depending on how fast you want to get the computer up and running.

But a growing number of independent repair services are adding to those options, including within-an-hour service, service guarantees and other innovations.

"We fix it or it's free," says David Milman, president of Rescuecom, a new company that promises to have a repairman show up in one hour or less for an additional fee.

Milman started out repairing computer in upstate New York in 1985. The company has grown to include 86 franchises across the country. Industry analysts predict that by 2006, computer service will be a $47 billion industry.

Major retailers such as CompUSA and Best Buy are also expanding their on-site repair service operations.

Craig Shue bought the Rescuecom franchise for Tarrant County in August. He liked the backup, a call center staffed 24/7, who then will immediately notify him . . . seven days a week, 365 days a year. No extra charge for weekends or holidays, he says.

Using a hand-held computer, he is in constant contact with clients and technicians, which gives him a real-time advantage in responding to emergency calls.

The unique software holds a database of information and like an instant messenger provides him with customer information, reports on when the technician arrived, what the problem is and how long it is taking to get the customer's computer up and running.

Companies often will pay whatever it costs, if they are doing business online or tied into networks. Being off-line can cost big money and customers. Homeowners can save money if it isn't a rush and they can wait.

Rik Wyrick, one of three founders of Supertech, based in Cedar Hill, says that most of the time home customers are willing to wait and pay less.

Supertech has been serving customers in the Metroplex for more than six years with 14 drop-off locations throughout the area, where those not in a rush can save money by leaving their ailing computers.

They also make service calls six days a week, he says. Of the 1,100 calls they made last year, 97 percent of the computers were "saturated with spyware."

So, Supertech makes sure not to leave without putting some anti-spyware and anti-virus software onto the clients' computers.

"You have to get in the habit of checking," says Wyrick, who constantly updates his virus blockers and runs a check of the hard drive three times per week.

Shirley Peterson, a franchisee with the Austin based CM Solutions, says, "If a technician can't figure out what the problem is in 35 to 40 minutes, then they should hand it over to someone else."

Peterson says the most important thing is not to lose any data. So they immediately copy files off the hard drive before starting to work on the computer.

Shue has been handling emergency calls for a few months, and he remembers a case on a Sunday evening when an emergency call came from a student needing the rush one-hour service.

"It was all pretty much spyware and a misconfigured router, I had him up and running in an hour and a half," Shue said

Headquartered in Syracuse, New York, RESCUECOM is the premiere franchisor in the computer services industry that delivers business and sales resources from the industry's "best of the best" computer technicians and consultants. RESCUECOM's main product, One-Hour On-site Response, delivers a certified technician to the customer within one hour of request and is available nationwide. As an Entrepreneur Magazine Franchise 500 company, RESCUECOM has been one of the fastest growing franchises in the past three years. For more information on either the business or franchising, please visit RESCUECOM's website at "www.rescuecom.com".