Problems with Windows 10 Operating System and Apps Most Common

SYRACUSE, NY, January 18, 2021 – RESCUECOM delivers their newest report on what errors are plaguing Windows users, the common problems and how to fix them.

Among Windows users seeking computer repair, problems with the Windows operating system and apps are most common, followed by printer and email issues.

Deficiencies in Microsoft’s operating system result in more PC repairs on Windows computers than all other problems combined. While many heralded Windows 10 as a step forward for Microsoft, the operating system continues to cause problems for users, leading them to seek PC repair.

Microsoft releases incremental security updates to Windows 10 regularly. Less frequently, they release new builds, which contain major changes to the software features and functionality. If there are problems during the Windows new build update process, they may cause the computer to “brick” by crashing and permanently damaging the computer, making it unbootable. Regular disk cleanup, defragging, and daily data backups are necessary to ensure a Windows computer stays up-to-date without problems.

“The release of new Windows 10 builds has presented a challenge for Microsoft because updating to new Windows 10 builds takes a long time and if something goes wrong, the computer can become a brick. This is one explanation for why over two-thirds of computer repairs on Windows machines occur because of operating system problems, a staggering statistic,” says RESCUECOM CEO David A. Milman.

Problems with Windows apps account for the second highest percentage of Windows computer repair, signaling improvements in Microsoft software are overdue. If you have difficulty with your Windows operating system or apps, updating to the latest proven build may help.

Printer issues represent the third most common cause of computer repairs among Windows users. When encountering an unresponsive printer, check the network connection. You can also try moving your printer closer to the router.

Email problems are often traced to outdated software. Downloading the latest Windows updates or Windows 10 build may solve your Microsoft Outlook problem. If the problem persists, set Outlook to run in “Safe Mode” without add-ins and check whether performance improves.

Internet and network connectivity problems are common for people seeking PC repair. Clearing your web browser’s cache and cookies may solve them, as well as using the Network Troubleshooter feature.

While Microsoft continues to improve their computer security, viruses in the form of ransomware caught by phishing scams remain a threat for Windows users. Scanning your PC as soon as you notice strange behavior can detect and remove them before further damage occurs.

Although some problems are only solved through professional computer repair, you can reduce your chances of having computer problems and requiring PC repair.

Instead of clicking “Remind Me Tomorrow” on Windows alerts, install updates and the latest build as soon as they are available to reduce your vulnerability to bugs and viruses.

When you notice your computer slowing down, consider moving saved documents, photos, and files that you do not access on a regular basis to a USB, an external hard drive, or cloud-based storage like OneDrive or Google Drive to free up space and help your computer run better.

Always follow recommended computer security protocol to keep hackers or other unauthorized users from accessing your machine. Never connect to unfamiliar networks or download apps from places besides the Microsoft Store.

Finally, you can prevent many Windows problems by performing a restart once a week. Besides giving your computer time to rest, performing a manual restart each week allows updates to Windows 10 to install properly. 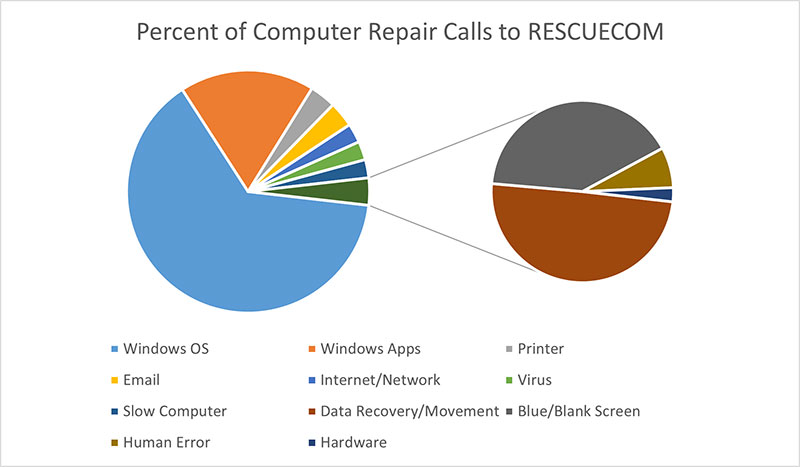 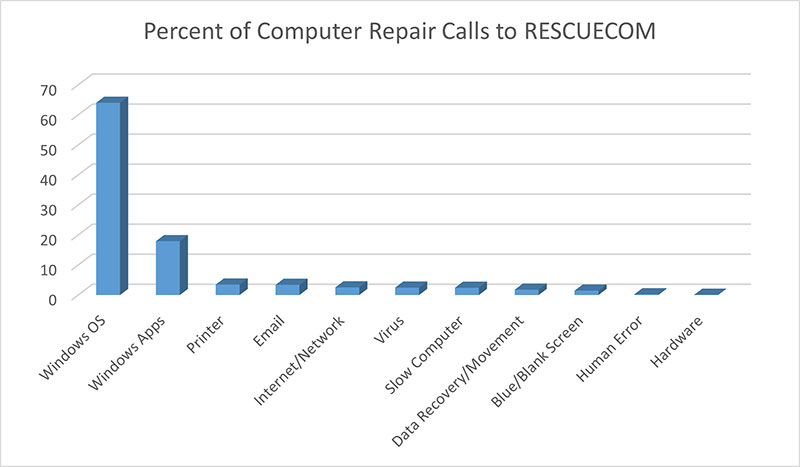