Windows is the most widely used operating system in the world but with it come a number of issues that seem to persist.

Microsoft launched Windows 10 in 2015 and with its initial release came a mess of issues for users. Over the past 5 years though, Microsoft has worked hard to provide updates that sort out some of those problems. These updates however, are never perfect and often leave the user wanting. As an operating system riddled with problems, it is no wonder Windows OS and app problems top the list of calls for computer repair made to RESCUECOM. You would think after years of troubleshooting and design they would have found ways to dissolve these glitches from the get-go, but unfortunately this is not so.

One of the most common problems with Windows is, after an update, the system will fail to boot up properly. While ensuring your computer has the processing power and space to handle the new update is essential, sometimes the problem is with the update itself. Starting up in Safe Mode and using the Windows Update Troubleshooter can help sort out the issue.

Windows users also frequently find their computers run slowly. Having too many startup items or too many programs running at once can easily cause the slow down. Use the Task Manager to remove any unnecessary or unused programs and startup items. It is also important to make sure there is enough space in the hard drive to run at top speeds. Using the Disk Cleanup app to clear the hard drive of any files you no longer need will free up space and increase performance.

Another common problem with Windows is Printer connectivity issues. Fortunately, there is an easy fix, just remove your current printer driver and then install the updated drivers for your printer model, from the manufacturer’s website.

The most frustrating problem with Windows however, continues to be its susceptibility to viruses and malware attacks. Although Microsoft has made some improvement in producing solid security solutions, it is still not enough. “Keeping a reliable, paid, updated virus protection and firewall is critical to staying safe when using your Windows Computer” says David A. Milman, CEO RESCUECOM, he continues, “it will save you a lot of headache as well.”

As one of millions of users, you will find it nearly impossible to avoid coming across at least one of these issues. Microsoft offers you plenty of support through online forums and their Feedback Hub, but even so, it is often necessary to contact a Microsoft Certified computer repair service that can find the fix for you.

Since Microsoft is slow on creating solutions, it is obvious why Windows problems make up the majority of all computer repair calls to RESCUECOM.

Here is a list of all Windows related computer repair calls we have received this year: 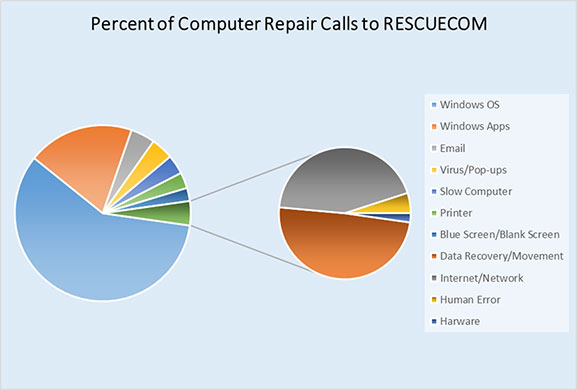 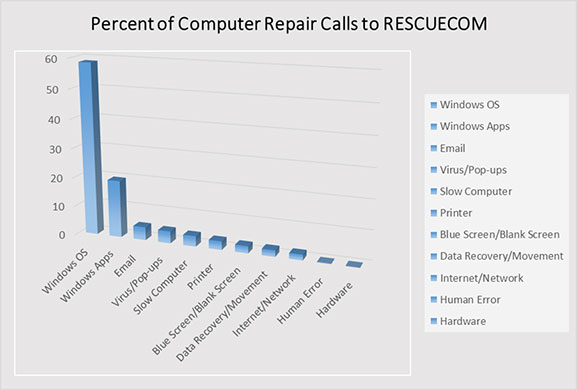