Though Mac is widely considered to have less problems than its counterparts, it still comes with some common issues including security issues. According to David A Milman, CEO RESCUECOM, “Even a Mac requires top notch, paid, reliable security.”

By and large one of the main complaints by Apple users is startup problems. Users are commonly faced with a grey, blue or blank screen. A grey screen generally means the failure of essential software is disrupting the boot up process. While a blue or blank screen suggest there are problematic apps or login items, likely a compatibility issue, causing the computer to freeze. A manual restart in Safe Mode is a good first step for either of these problems. Safe Mode will allow your computer to start up with the minimum amount of items required to run and will cause macOS to run diagnostics. Running Disk Utility (“Disk Repair”) and/or removing any unnecessary or incompatible login items will also remedy these types of issues.

Another common problem Mac users face is a sluggish computer. There are several different reasons this could be happening. For one, the computer might just need an update. New updates help keep the system running at optimum levels and fix any latent bugs. There is also the potential for viruses and malware attacking your computer and causing the slow down. Running a system virus scan to identify and remove any malicious software is key. It is also important to ensure there is enough space on your Mac to run at its best. Check the storage available on your Mac (Apple menu > About This Mac > Storage > Manage) and use the Reduce Clutter option to remove any items you no longer need. A quick look at the Activity Monitor, under the Memory tab, is another reliable way to find out if something is monopolizing your power. You can then cancel processes, like unnecessary background programs, to release the power to be used for something else.

Some other smaller issues users experience are a frozen, unresponsive app or the “spinning beach ball of death”. When either of these problems happen it is impossible to do anything including quit out of a program. Using the force quit command (Command-Option-Esc), is the best option, allowing you to force close any programs giving you trouble. Sometimes if you have recently completed a macOS update, the app or an item within the app, stops being compatible with the new version of macOS, causing the beach ball to appear. This is why it is important to ensure apps and software are updated and compatible to keep them running as they should. If the spinning beach ball is a frequent occurrence, check the Activity Monitor and see if something is taking up too much power.

Though common problems exist with Mac, Apple does a lot to help you solve them. It is easy to see why Mac problems take up the least amount of calls to RESCUECOM for computer repair. 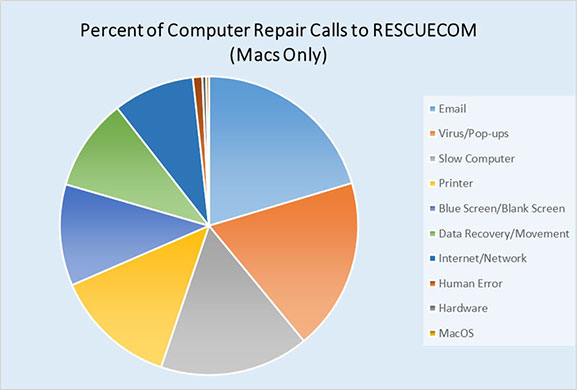 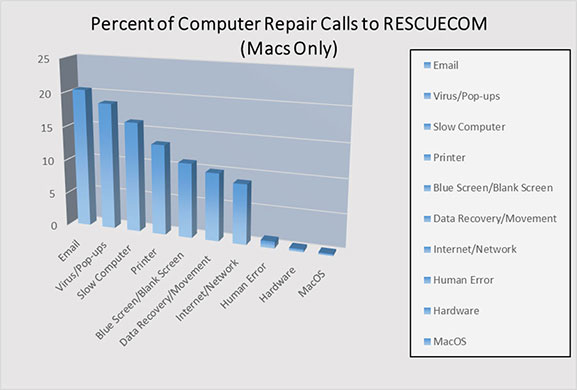