What is Patch Tuesday and What Does It Mean to You?

Posted on September 8th, 2014 by RESCUECOM 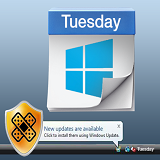 While software developers and computer repair professionals know the term very well, many computer users do not know what a “patch” is or what it does.  A patch is a piece of software that updates a computer program to improve or fix it.  Patches can fix security issues, get rid of glitches and bugs and even add brand new functionality to a computer program.  Patches evolve computer programs over time to both protect people that use the program from online attacks and to make the software better for their use.  Some of the most important patches that people receive for their computers are patches that fix problems with Windows, the most used operating system on desktop and laptop computers. Without these patches and updates, many people’s computers would remain vulnerable to online attacks and exploits.

Microsoft releases patches for Windows in two different ways.  When there is an emergency, such as a widespread security issue or a major problem with functionality, Windows will release a patch as soon as possible.  However, most Windows updates are on a specific schedule.  Microsoft releases updates for their software, including Windows, on the second Tuesday of each month.  People have commonly come to refer to this day as “Patch Tuesday”.  Microsoft also occasionally releases updates on the fourth Tuesday of the month as well, giving people two Patch Tuesdays in a single month on occasion.

If anyone has ever wondered why Microsoft recommends that people set Windows to update automatically, it’s because those updates, both the ones released for emergencies and the ones released on Patch Tuesday, protect people’s computers by fixing security issues.  The faster a computer downloads Windows updates, the faster it will have protection against exploits and online attacks.  Many online attackers go after computers that did not update on Patch Tuesday, since those computers are still vulnerable to exploits that updated computers are not.  This situation is why it is very important for people using a Windows computer to turn on automatic updates.

Microsoft began the pattern of releasing security updates and patches for their operating systems on Patch Tuesday over a decade ago, in October of 2003.  Windows XP, Windows 7 and Windows 8 now all receive updates on Patch Tuesday.  However, Windows XP will stop receiving security updates on July 14, 2015.  When Microsoft no longer releases security patches for Windows XP, Windows XP users will be at much higher risk for online attacks unless they install comprehensive Internet security software that still supports Windows XP, such as the RESCUECOM Internet Security Suite.  People who use any of these operating systems and believe an attack has compromised their computer should seek help from a tech support provider and have them look into the situation.

So what does Patch Tuesday mean for you?  It means it is best for you always to have automatic updates turned on when using a Windows computer.  You can minimize risk to yourself and your Windows machines by making sure that your computer automatically installs all the updates it needs when Patch Tuesday comes.