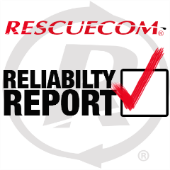 The latest RESCUECOM Computer Reliability Report – based on 60,000 service call requests into our 1-800-RESCUE-PC hot line annually – rates the Kindle as the most trouble-free tablet.

Spring is here and time to get rid of the old and bring in the new! If this for you means purchasing a new computer to replace your outdated or poorly performing device, RESCUECOM’s 2016 Computer Reliability Report will help you be well prepared to bring home only the best and most reliable computer.

In this latest quarterly report, Apple and Samsung, though still top performers, are no longer vying for first place in the rankings.

Amazon has taken over as the most reliable brand due to the fact that RESCUECOM’s Computer Reliability Report now includes tablets and PCs of all brands with a market share of over 1%.

The strong performance and popularity of Kindle tablets as well as the launch of several new Amazon products in the summer of 2015 has earned Amazon this top reliability rank.

To create the ReliabilityScore™, RESCUECOM compares a brand’s market share against its RepairShare™, or the percentage of computer repair calls received for that brand’s devices, to create a number representing its ReliabilityScore™.

Each brand is then assigned a ReliabilityGrade™ which is a familiar way to compare each brand with others, ranking from A+ to F with C, or average, considered acceptable.  Each brand also receives a rank, or a numbered place on the list from the most to least reliable brand.

This inclusion in this year’s RESCUECOM Computer Reliability Report of all manufacturers with a market share of at least 1% allows for more in-depth analysis and comparison enabling consumers to make even better choices when purchasing new technology.

RCA makes a return in 2016 by ranking second place. RCA has experienced varying percentages of the computer market share, but now shows consistent strides in reliability while maintaining generally lower-priced products.  This is especially true of its popular tablets, particularly its 2-in-1 tablets such as the Viking, Maven Pro, and Cambio.

Apple has not dropped dramatically in reliability and only slightly in its rank, taking third in the rankings for this year. Apple has a relatively low 2.5% share of repair calls, especially considering Apple holds the highest market share at 21.3%.  Apple’s devices steadily attract consumers, with the Mac as well as the MacBook Pro remaining popular alternatives to PCs.

Verizon is another brand that has come and gone in RESCUECOM’s Computer Reliability Report due to shifts in Verizon’s market share.  Verizon takes fourth place in this year’s report.  Verizon controls only 1.4% of the market but also accounts for only .2% of the total RepairShare™ among computer manufacturing brands.  Verizon now sells its own tablets, such as the Ellipsis 8.

While absent from last quarter’s report, LG is the fifth most reliable brand this report. LG’s inclusion in this report is due to its market share of at least 1%. Consumers have been impressed with LG’s G Pad line of tech devices.

2 – The computer reliability report does not include “other” brands, defined as all brands that have below 1.0% market share or not on the market for at least one year.