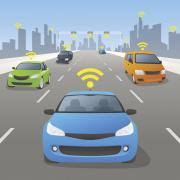 The term “self-driving car” and the thought of one probably conjures up thoughts in most peoples’ minds of someone eating, reading, or even sleeping while their car drives them where they want to go. They may think mainly of Tesla and Uber, arguably the two largest companies most heavily in the development and application of autonomous, or self-driving, cars. Like many technologies, this one has roots much earlier than many would think. Unlike many technologies developed over a long stretch of time and only being perfected today, however, vehicular autonomy, or the ability of a vehicle to drive itself without human assistance, did not have the potential to exist at the time it was imagined. While the idea existed, the technology available simply did not allow for its application. This is particularly interesting given the normal course of technological progress wherein an idea develops and a very crude prototype created, and inventors continue to create more advanced prototypes until technology allows for a much more useable application or even perfection. Another thing making the case of autonomous vehicular technology even more interesting is the case of the airplane. Lawrence Sperry, the head of the Sperry Corporation, an aviator, and the son of then-famous inventor Elmer Sperry, invented autopilot for airplanes in 1912. This was not even a decade after the Wright brothers’ famous first successful flight at Kittyhawk, North Carolina in 1903.

In its earliest days, autopilot used a gyroscopic heading indicator and attitude indicator to control hydraulically operated elevators and a plane’s rudder, allowing it to fly straight and level on a compass course without a pilot’s attention. Technology has since allowed for the near-perfection of autopilot through the use of more advanced tech, particularly computer systems and sensors. The question of why this was possible for airplanes and not for cars is not a difficult one to answer, however. The sky and the road are very different things, and autopilot does not aid the pilot in any way during takeoff or landing, arguably the two most important parts of a flight. Airplanes can rely on advanced instruments such as its altimeter and GPS receivers as well as navigational aids to obtain sufficiently accurate information on its position. These accuracies are much too indelicate for ground vehicles on roads, particularly when it comes to winding stretches, bends, and the like.  In addition, GPS only guarantees two nautical miles of accuracy for en-route navigation. It is therefore not accurate enough to distinguish a lane-specific position, even with the aid of cellular tech and Wide Area Augmentation Systems, which planes have but cars do not. It may be accurate enough for vehicle operations in open areas, but certainly not for road lanes, and definitely not where there is traffic. Further, airplanes have transponders to response to ground radars in order to report identity and position. No such equipment exists for automobiles. There are many more reasons why autopilot is so easy to implement for planes and not for cars, but these are the main hindrances.

The dream of giving vehicles the ability to drive themselves developed in the 1920s, and the main reason this could not happen was an inability to implement any kind of computer controls, sensors, and the like required for it to work. This is obviously technology unavailable until much more recently. There was simply no way for such a thing to work without computers, and so it remained a dream for decades. This is actually not where the dream began, however. Among his many other imaginings and inventions, Leonardo DaVinci had a design for a cart able to drive itself in the middle ages. This would have been incredible for its time, but not even the great DaVinci has the time in his life to devote to making such a thing happen, even in such a rudimentary fashion. Still, it shows humans have long desired to ease the burden of driving whatever it is they need to use to get from one point to another. We can go as far back as ancient times to the 1001 Arabian Nights and the tales of flying carpets, and there is even a story from 130 B.C. of a flying carpet carrying King Phraates II of Parthia into battle. As it turns out, flying carpets have existed in folk tales from Iraq to Russia for millennia. This fantasy involves the ability of the carpet to magically know its destination and the ability to completely avoid fatigue in reaching it much more quickly than one could walking, running, or even by horse. Of course, in the case of the flying carpet, much of the fantasy involves flight, but all of the elements are present.

The dream of the autonomous car simply could not reach its realization until the advent of modern technology. Unlike planes, sailboats, drones, self-propelled crop harvesters, or even the Mars rover, cars need to navigate a complex maze of city streets and sometimes pass mere inches from objects as well as people. Even the Roomba, the tiny robotic vacuum, is self-driven. However, the ease and simplicity of these self-driven devices is obvious, and it is twofold. Firstly, they run in pre-prescribed programmed paths and, secondly, they don’t destroy property or kill living beings when they run into them. These harmless machines will simply change course upon bumping into something in its path. By the time a car has run into something blocking it, you already have a major problem on your hands. Now, however, several companies say they are now close to making self-driving vehicles a reality, and many have long suggested self-driving cars as well as self-driving city buses and similar modes of transport will replace public transportation. Visions of the future in some stories and movies even include completely automated highways in which every individual car drives on a prescribed route with no effort whatsoever from drivers. While this is far from happening as yet, the dream of self-driving cars has already seen limited success. Previously, people had only witnessed demonstrations of cars with the ability to steer themselves by sensing and following special markers on a set course previously laid out. After this, some had demonstrated cars “driving” themselves via magnets embedded in the road, so it could only be on a specific course. No one truly succeeded with a truly self-driving car until the 1980s. At the time, Mercedes-Benz developed a vision-guided robotic van reaching speeds of up to 39 miles per hour on streets without traffic. The same decade, universities and research labs worked in conjunction on a government-funded project to develop an Autonomous Land Vehicle (ATV) using LIDAR, computer vision and autonomous robotic control to direct it at speeds of up to 19 miles per hour. It achieved off-road map and sensor-based autonomous navigation in 1987, and the technology continued to develop from there.

Today, there have been several demonstrations of genuinely self-driving cars, a few of which have been moderately successful. What was necessary to get to this point and what will be necessary to progress from here involves several complex steps. Lidar measures distances, with advances in tech making those distances more exact. Also in development are sensors to read and interpret specific colors and radars. Onboard computers now have the ability to fuse these individual data streams together and apply artificial intelligence to derive insights. The goal in mind is to create a system which can distinguish the differences between another car, a pedestrian, a bicyclist, dogs from small children, and millions of other objects from each other. It also needs to learn to distinguish a four-way intersection from two-way and an intersection from a roundabout as well as differentiating between specific road types and driving styles. A major element of all this is newly emerging technologies necessary to make it work. It requires sophisticated computers systems and advanced sensors as well as AI able to adapt and learn, something relatively new in itself. There are still some hindrances to making autonomous cars relevant and put them into mass production. There are even now new model cars offering driving assistance. These include the ability to sense when a car is crossing a center line or shoulder line on the road and either alert the driver or, in some cases, automatically turn the wheel to center the vehicle. Truckers are now driving across the country in 18-wheelers which automatically brake when they get too close to a car or other object in from of them. There are others, and a truly autonomous vehicle could not include anything less than every one of these features utilizing the most advanced parts to be able to work safely. The RAND Corporation has estimated self-driving cars being observed for research would need to drive close to 11 billion miles before providing reliable statistics on their safety. At this point, twenty companies testing self-driving cars in California collectively logged just over one million in two years. Clearly, there is much to learn, but all of the pieces are in place to make autonomous cars a reality in the not-too-distant future.